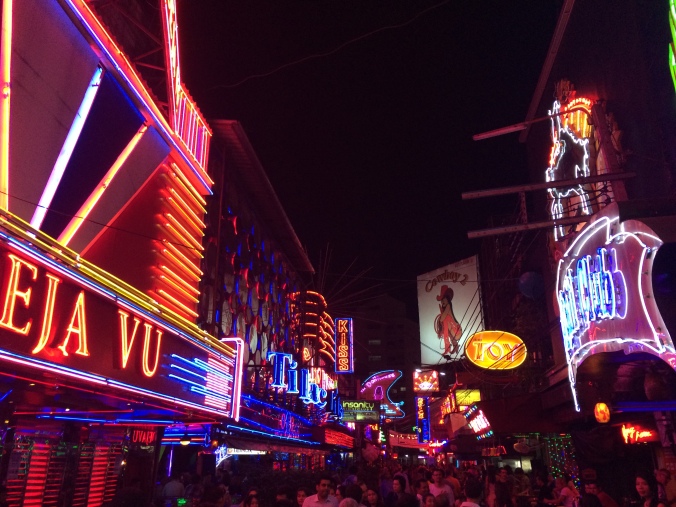 Arriving in Bangkok for the second time during our trip, we vowed to do things differently. For starters, we were dying to hear some decent music. For anyone that doesn’t know us — we are massive electronic music fans. Having traveled over much of North America to music festivals and having lived in Toronto, a city blessed with a rich electronic music scene, it’s been far too long since we’ve heard the thumping bass of techno and house music pounding through speakers. We knew Bangkok was the solution to our dilemma.

On our last trip to Bangkok we stuck to Khao San Road and the wats, but consequently found ourselves surrounded by backpackers at all times. This time around we left the hostel region behind and explored some of Bangkok’s darker side — both the good and bad. Many of Bangkok’s clubs were in the Sukhumvit neighbourhood, also home to the infamous Soi Cowboy and red light district. We decided to check things out for ourselves.

Nakadia, a Berlin techno/house DJ, was playing at GLOW Club Bangkok, so we drank some Red Bull and hobbled over to the entertainment district for some much needed dancing. On the way, we wanted to see what the fuss was all about in the red light district (sorry mom and dad, stop reading now!).

The red light district in Bangkok is full of neon lights and girls in barely any clothes trying to get people to come into their respective clubs. It felt a lot like walking through a packed shopping mall, except half of the people you were passing were scantily clad Thai girls and the displays were dancing on poles. The shoppers? Older white men hoping to find the loves of their life and naive, but excited, young backpackers not knowing their wallet was about to be emptied. We managed to get through Soi Cowboy relatively unscathed, save a few dirty looks.

Five minutes later, we arrived at GLOW Club. The club is small but it made for an intimate atmosphere. When Nakadia came on, fans were cheering and reaching for handshakes over the DJ booth. She was smiling and bumping to the beat, happy to be playing for everyone. Her set was everything we hoped for and it felt so good to just dance with a crowd of people who were truly into the music, expats and locals alike.

We left just after 2AM and started the walk home. We got dropped off near Khao San Road and unfortunately, the scene there wasn’t nearly as pleasant. Backpackers with buckets of booze were throwing up on the street, hobbling home, and some had shirts off fist bumping to country music. We grabbed a crepe and made a mad dash for our hotel.

The night life in Bangkok definitely has something for everyone. The clubs are proper and if you want a taste of real nightlife, stay away from the backpacker haunts and dress up for the clubs.

One thought on “A taste of nightlife in Bangkok”