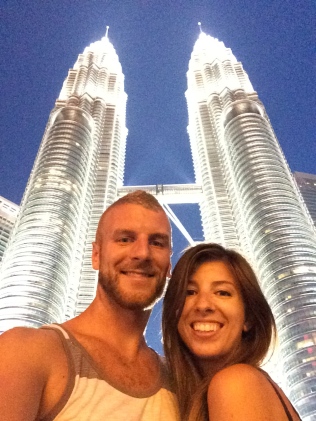 Going to Malaysia was sort of a last minute plan for the two of us. We wanted to get more out of our trip to South East Asia, rather than just the typical route, so we budgeted and made it happen.

Kuala Lumpur turned out to be a really incredible city, with tons of things to see and do. The East Indian presence made this country very unique from all the others we had been in so far. The food, customer service, and overall atmosphere was completely different. They also have a really amazing transit system that includes free bus routes. Once we mastered the routes, we were able to explore the entire city for free.

Teh tarik, before being stirred.

We started off each morning with roti, and I fell in love with ‘teh tarik’, their signature milk tea. It was sort of like a chai tea latte. For $1 a meal, we were on cloud nine. The flavors and cost of the Malaysian food was a total highlight of our trip. But, more on that later.

The city is known for its obsession with shopping malls. In the downtown core there were almost a dozen megamalls that put most western malls to shame. Massive skylights, hundreds of stores, roller coasters inside, and arcades that stretch from one end to the other, it was the definition of excess. We were staying right by the iconic Bukit Bintang mall, and it didn’t disappoint. It had been months since we stepped inside any mall, let alone one this massive. We indulged in some shopping and got some phone cases, screen protectors, and a few other tech-necessities for super cheap.

Later, we headed to the hawker street and Central Market for some local food and souvenir shopping. We walked and walked until our feet couldn’t take any more. At sunset, we caught the bus to the Petronas Towers to enjoy the lights.

It felt really surreal to be at the bottom of the Petronas Towers. We were extremely excited and took probably 100 selfies. While there’s not much to do other than gawk at the height and beauty of them, it’s something that should not be missed. It’s hard to describe how beautiful the towers look when lit up at night – the pictures hardly do it justice. There was also a free light and water show at sundown.

On our way home, we stopped for some satay in Chinatown and revelled in the people watching and street-food smelling.

The next day, we headed to Batu Cave. After a short ride on the subway, you can walk to the cave from the station. We lathered on the sunscreen and headed up the massive flight of stairs into the cave. While the cave itself isn’t too pretty, there are monkeys everywhere vying for food. Luke loved getting up close to them but they didn’t seem friendly, so I kept my space.

We have such fond memories of being in Kuala Lumpur and it was hands down one of our most favorite cities so far. The people, the food, and the incredible infrastructure really blew us away. If you haven’t done so already, make sure to put Kuala Lumpur on your list!

2 thoughts on “Living the city life in Kuala Lumpur”