We had been anticipating Berlin for some time, but had no idea what was in store for us. We were lucky to be hosted by Luke’s gracious cousin Ariana, in the hip, up-and-coming Wedding area.

We knew that one of the main things we wanted to do in Berlin was to taste some of their famous nightlife. Berlin is home to many techno legends and also to Berghain, a super-hard-to-get-into, cool-kids-only techno warehouse that is known for partying nonstop from Friday evening until Monday morning.

First, we took in a walking tour and tried some of Berlin’s famous dishes. Of course, I wanted to try the Doner and see how it differed from Nova Scotia’s Donair. While both have the same sort of concept, I must say that the taste was completely different. We loved sitting in the street and sampling some of the great restaurants. We also spent the day at the lake with all the locals, sunbathing and cooling off in the water. We enjoyed some meat and bread in a mini picnic before heading home as the sun went down.

In the evening, we all went out for a night on the town, Berlin style. We headed to the club

district and stopped off the subway to grab a drink on one of the stands that sells alcohol. It’s interesting and exciting being in a place where you can drink so freely. A breakout party had started on the street below, underneath a bridge where music was playing and people were dancing. It’s common to pop into corner stores on the way to a club to buy cheaper drinks before hitting your main event.

The following evening, Luke and I tried to get into Berghain. The club is well known, so it does attract a lot of tourists, which the bouncers hate. You can read all sorts of tips, but really, it’s up to the bouncers to decide if you make the cut. No one knows what they look for, but they’re rumoured to prefer you wearing all black, not be too young, preferably single… the list goes on and on. We waited in line for 45 minutes, and finally the bouncers did a string of “no’s” to about 15 people before stopping at us. We waited until it was our turn for judgment to be passed and after a few moments of consideration, we also got the dreaded headshake. For me, it was a huge disappointment (although sort of expected); I had gotten my hopes and excitement up. Ariana was quick to make me feel better, assuring me that she heard that usually only 40% of people who try to get in actually get in, therefore it wasn’t personal. Still, I’m a huge techno music fan and it sucked to get judged by a quick and brief look.

Moving on, we enjoyed walking through the artistic district of Berlin and experiencing the hipster culture. Berlin is so, so cool and has so much life to it. We walked along the Berlin Wall at sunset, which was so mesmerizing. Ariana’s father had been able to pass through the wall back in the day, so it was interesting to hear about his story and think about what people had went through at that time. It really wasn’t that long ago at all that the city was living through such a different reality.

Now that we’re home, I think of Berlin often and feel as if it would be the place I would feel the most at home. There was something so special about it, so unique and perfect, that it’s been calling my name ever since we left. 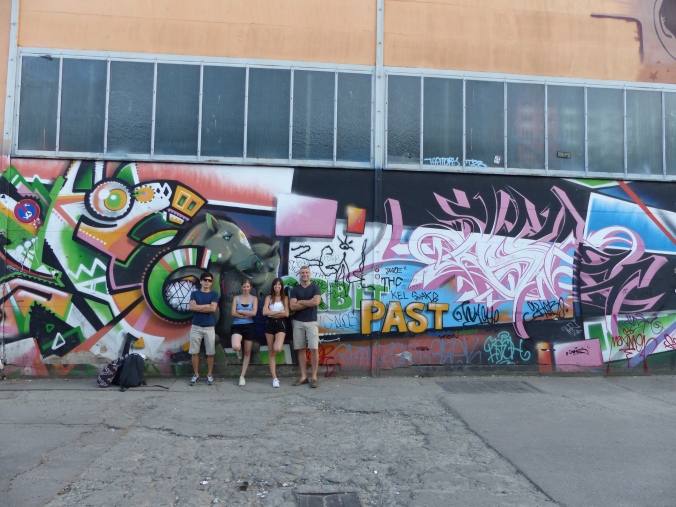