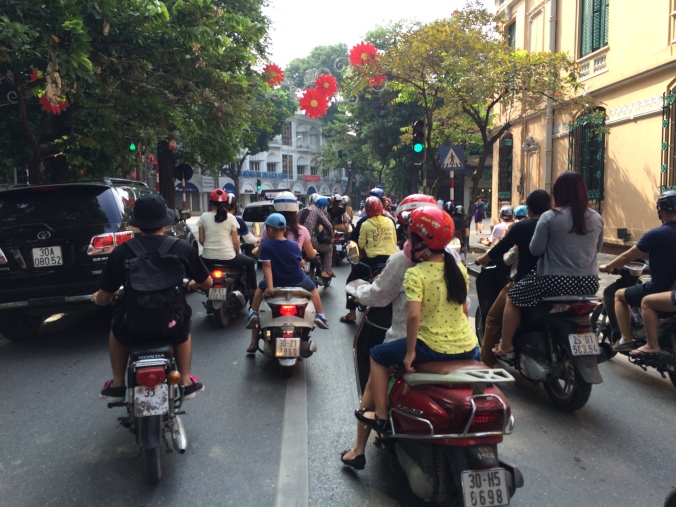 Our original plan for the last year was to travel South East Asia and settle down in Vietnam to teach English. This week, we finally made it to the place we’ve been dying to see: Hanoi, Vietnam.

The city is more than we expected. Busy streets, incredible food, everything you could ever want or need being sold, and beautiful lakes.

Actually, when I said the streets were busy, I think that’s a tad bit untrue. The streets are insane. They’re more than insane — they’re bursting with people, motorbikes, cars, buses, vendors, bikes, cats and chickens. Our hotel had a notice that stated: “To cross the street, remain confident and walk at a steady pace”. Every street crossing is a brush with death, but I think we’re getting the hang of it.

The people are very friendly here. We’ve taken to eating a lot of street food and almost every time we sit down with a new bowl of something, the staff will butt in to help us figure out how to eat it. I suppose we’re not fooling anyone here. 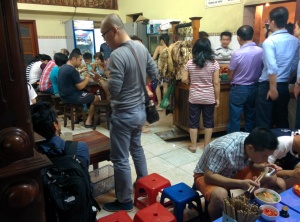 Can you spot Samie?

We’re getting into eating Pho, which is a traditional Vietnamese soup with broth, noodles, meat, and herbs. Back in Toronto, we pronounce it “F-oh” but here, when you ask for it like that, people look at you like you have three heads. It’s pronounced “Fuh” here (thank you, Google).

We went in search of “The Best Pho in Hanoi”, which is next to impossible. Hanoi is renowned for Pho. It’s being sold nearly everywhere. You get it for breakfast, lunch, and dinner. You can get it with beef, chicken, pork, or just tofu. You can dress it up any way you like it with sauces and chilis. It’s pretty damn good and for some reason, we never seem to get sick of it. The other plus? It usually costs about $1-2. 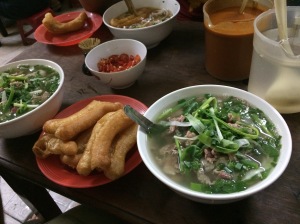 Our favourite place so far was a small spot at 49 Bat Dan. It was packed full of people, and you got to see the entire soup-making process happen right in front of you. First came the butcher, who endlessly chopped and shaved her way through racks of salted beef. Next, a serving of white noodles was tossed into your bowl, the beef was added on top, and some raw beef was put on the other side. The man with the boiling broth came next, and he blanched the raw beef, then put a big handful of greens on top. It was an efficient chain – from the slab of meat to the finished product took about a minute flat. 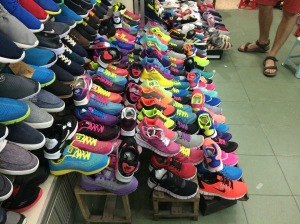 about Hanoi is you can get anything you want (knockoffs, of course) for super cheap. Want fake Toms, Nikes, or Zara clothes? They’ve got that. Need a broom? Oh, there’s a woman with a cart walking past your house right now with 10 different kinds. Phone cases, suits, purses, sporting goods — they have it all. And before you go knocking knock-offs, it’s become a sport to try and ‘spot what’s missing/wrong’. With a lot of items, we’re hard-pressed to tell the difference.

The weekend night market is also jam packed. People line the streets selling just about anything, and on the side streets people cram in, sitting on small little stools frying up their dinner.

We decided that Hanoi is the place for us to settle down for at least six months, and we decided to find ourselves an apartment. We’ll save some pictures of our new place for once we’re all moved in! For now though, we’re heading south to Hoi An – be patient while we drop off the grid for a week or so!